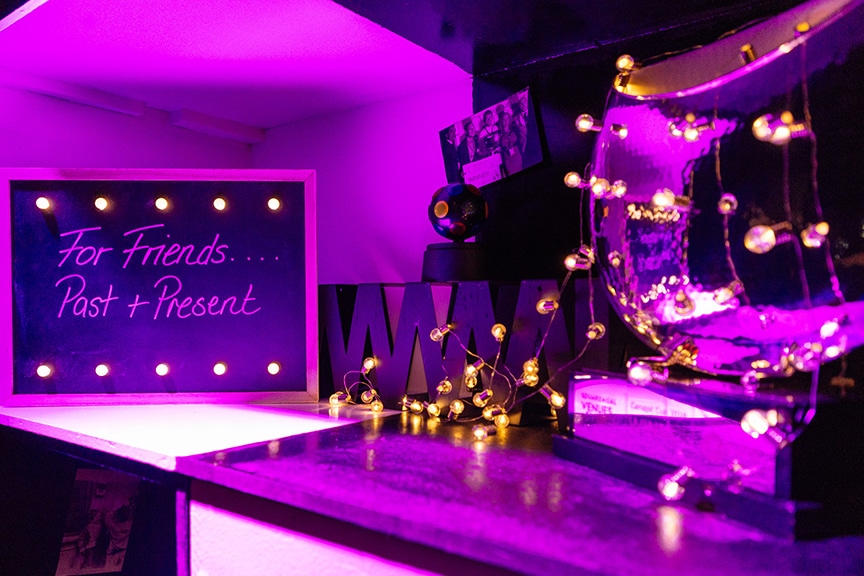 On Tuesday 23rd October Boulevard celebrated 30 years in business at Studio Spaces, one of our blank canvas venues, a stone’s throw from St Katherine’s Dock. It’s difficult to some up just how special this event was, not just for us – the existing Boulevard Events team – but for the people who helped us get to where we are. The founders of our family business, Madeline and Steve (AKA mum and dad), their friends – who watched them struggle through multiple recessions and raise two babies while running a restaurant – and our clients, staff and suppliers who have shared in the journey through two generations.

In many ways it was the most important night since we opened on the 6th May 1988. It was a chance for the second generation to pay tribute to the first and acknowledge their achievements in front of a full audience, people who witnessed those achievements first hand and shared the memories. The sense of nostalgia created by all this was thoroughly overwhelming and set the tone for a truly memorable event. 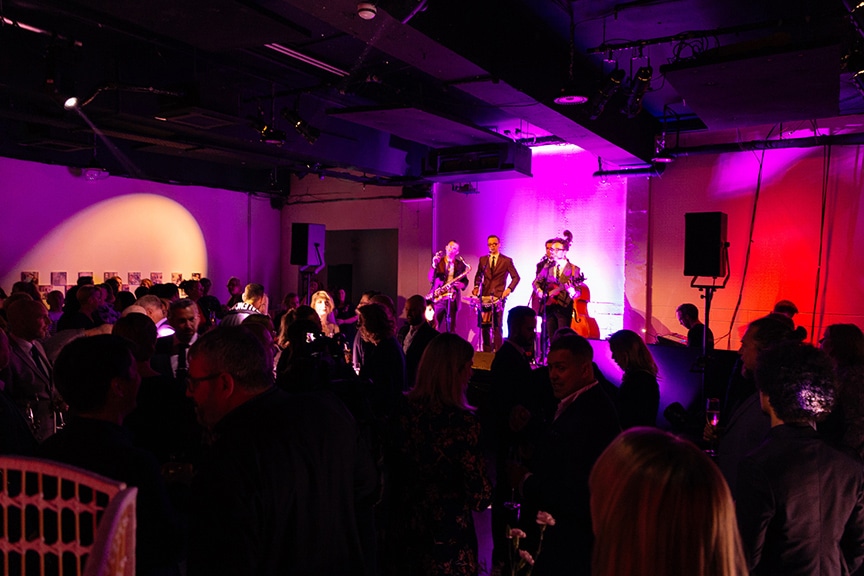 The night began with a throwback to the original Boulevard restaurant, with pink linen table cloths, patterned drapes and 80s classics played by the exceptional Wandering Soul. Exquisite Cocktails served ‘Long Island Ice Teas’ and a revamp of the infamous ‘Sex on the Beach’ as a nod to the cocktail menus of the ‘80s. Old photos from the Boulevard restaurant lined the walls, prompting conversations about the ‘good old days’ and – just like the early years – every guest was greeted by name at the door by one of the family.

The table arrangement comprised the finest of Adams Catering Hire, Northfields Linen and A.G. Price Florists. Long, festival-style tables, stone grey linen with chalk napkins, London cutlery in gold, allure glassware and cross-back oak chairs with cream seat cushions. Against the exposed brick and stripped back, blank canvas of Studio Spaces, the dinner set-up was a long way from the décor of the original Boulevard restaurant, but right on trend in the current events and weddings market. 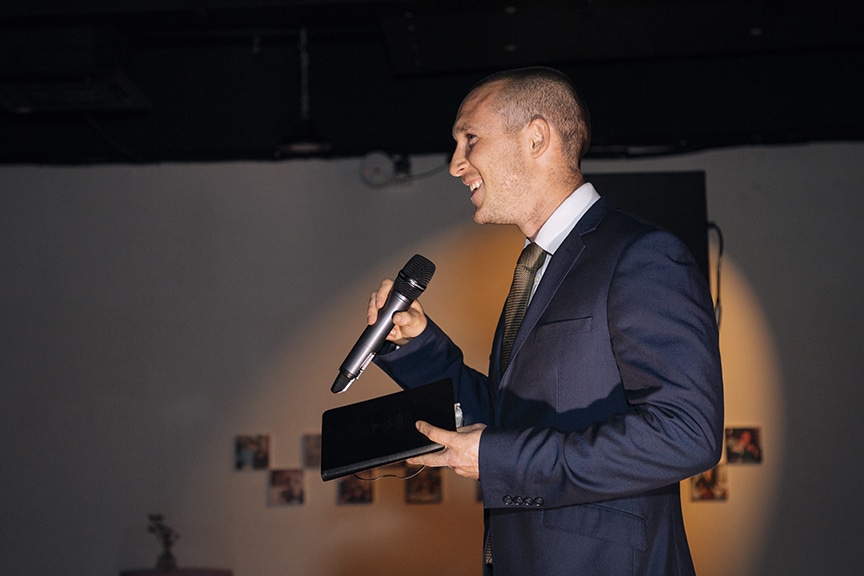 Speeches were opened by Boulevard’s youngest son, Mark, who took his time in thanking the staff, family and suppliers of Boulevard Events, as well as some key clients who have been integral to the growth and success of the company; England Hockey, The Troxy and Unicorn Events to name a few. Executive chef, Adam Neale, then walked everyone through the menu…

A shared fish starter kicked off the meal, the family-style plating indicative of the company’s ethos. Marlvin’s monkfish was inspired by his popular staff lunches, a firm favourite of the team are Marlvs’ sensational curries! So seared monkfish tail was served with his trademark korma sauce, as the centrepiece of the starter. Marlvin is Boulevard’s longest standing employee of over 15 years and his presence on the menu was a vital part of the meal. Marlv also received a long service award on the night, a flight to Sierra Leon for him and his wife to see their family. 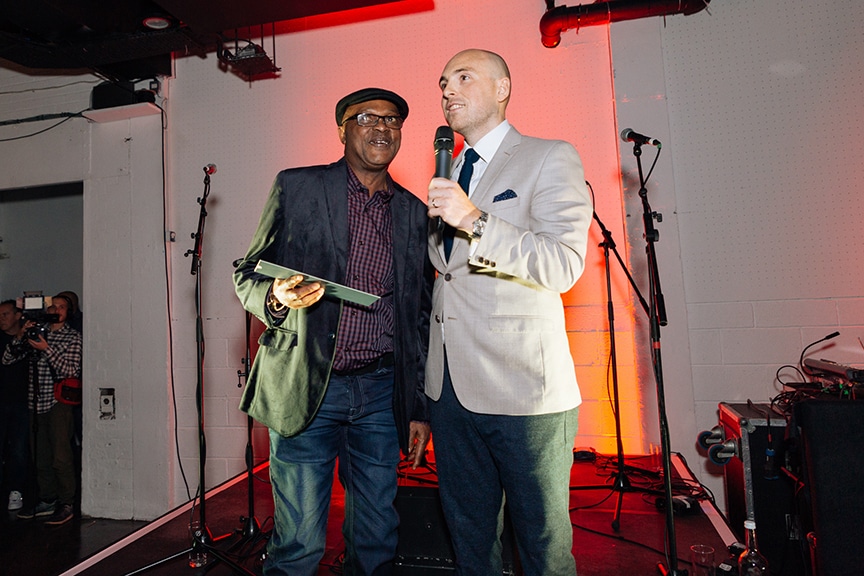 The name Sunday Roast – £4.95 was another throwback to the restaurant, £4.95 being the price of a Sunday roast in the early days, but this was no ordinary roast dinner. Sirloin of beef served medium-rare, pulled beef shoulder braised in a sweet red wine jus, a single giant roasted chip crispier and fluffier than the smallest of the small roasted spuds, cauliflower cheese puree and sprouting broccoli. The sweet red cabbage and Yorkshire puddings were served just as they should be, in a big bowl in the middle! 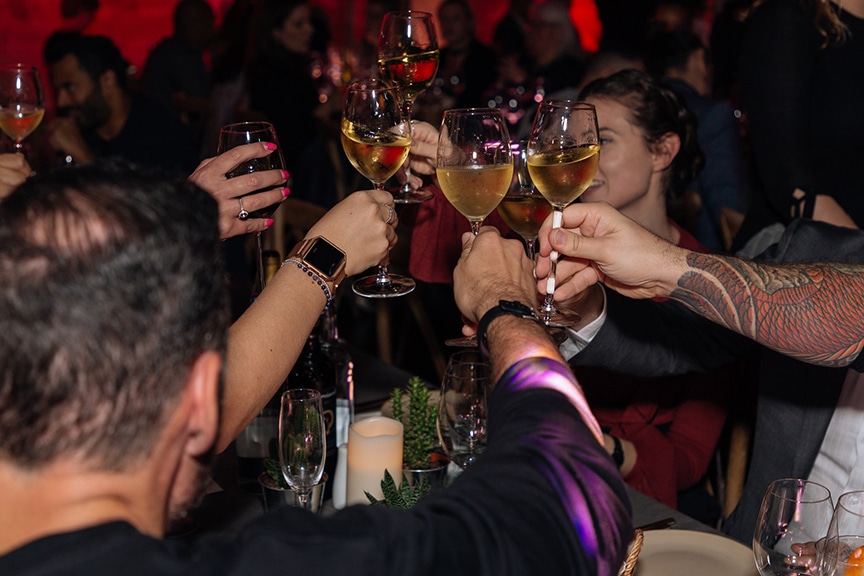 After the main course, Boulevard’s middle brother Daniel said a few words and paid tribute to the founders of our family business, presenting Steve and Mandy with a framed, A1 illustration of the company’s 30 year history, drawn by the talented family friend Moggy Meg. After he told a few entertaining tales from years gone by, Dan invited our 165 guests through to the Black Studio, another of Studio Spaces’ stunning event spaces, where we hosted ‘The Afters Party.’

This was the real show-stopper and the part where we let the creative side of what we do come to the fore. Four dessert stations were linked by festoon lighting around the Black Studio, the centre piece a three-tier birthday cake, baked by our head chef Rhiannon Ball. Each of the three surrounding stations were themed to one of our Square Meal Canape Cup winning canapes; 00Heaven (2015), Something to Treasure (2017) and For Friends Past and Present (2018). Each tier of the birthday cake was flavoured to match one of the three dessert stations; bannoffee pie, baileys & chocolate and salted caramel & hazelnut. While each station was themed to match the name of the canape it was built to represent. It’s a complex explanation so we’ll let the pictures do the rest. 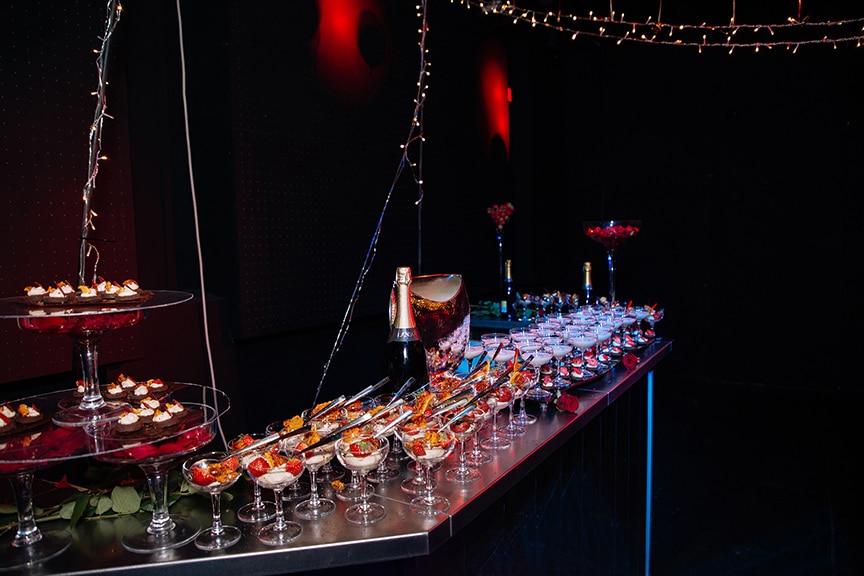 As guests enjoyed their dessert, Wandering Soul got the party started and guests danced until the early hours. Nothing can summarise the whole experience better than a quote from our dad, Steve, who has a refined talent for finding something to complain about:

Here’s to another 30 years

I spent most of my youth hanging around the kitchen in our family restaurant ‘Boulevard.’ I was always intrigued by food and how it’s prepared to enhance different flavours and then presented immaculately. I feel privileged to be in the position to be able to work with my family everyday, planning, organising and delivering exceptional events with outstanding food.